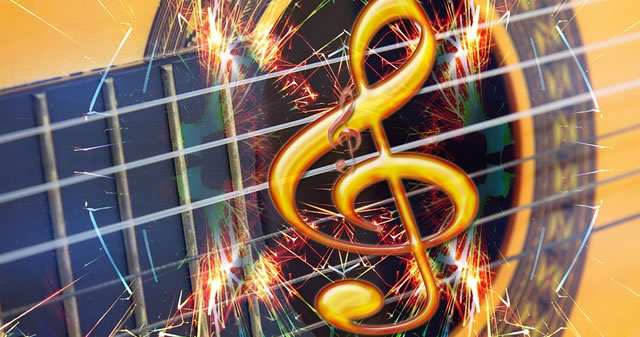 DADGAD Tuning is probably the most popular alternate tuning right behind Drop D tuning. But truthfully, DADGAD is not a great alt tuning. It sounds nice, but it can be difficult to get your fingers on even common chords. This is partly because DADGAD — specifically the notes D, G, and A — is a D sus chord (1 4 5), making it challenging to play some Major (3 – “third”) or Minor (b3 – “flat 3”) chords.

If chord formulas are new to you and you’re not familiar seeing chords written using numbers, don’t “fret” – we will be going over this in our blog posts.

Master DADGAD Tuning in the Key of D Major with AltTunings.com’s printable “Guitar Tunings Chord Charts,” featuring 60 chords in the scale and 107 chords out of the scale (by one note) in 30 different chord types! Just $1.99!

Want to see a sample first? Get your FREE 36-chord sample of DADGAD (Open Dsus) Tuning below, in 4 different formats!

Okay, back to the tuning…

So even though DADGAD is not a very user-friendly alternate tuning, I wanted to start 2016 with a tuning that many guitar players are familiar with.

Here is a song/idea titled, “Missing Dad” in the key of D Major:

To kick off, here’s “Hollow,” a song I wrote featuring some interesting chords and chord voicings using DADGAD tuning in the key of D Major. After the video, I’ll help you with detailed instructions and screenshots of the Major and Minor chords and note locations in DADGAD tuning.

Grab your guitar and a beverage of choice, then tune to DADGAD. Let’s try some of the interesting chord voicings you heard in “Hollow.”

The D Major scale has (3) Major chords: D Maj, G Maj and A Maj. We’ll look at all three below.

Here are the locations of the notes D, F#, and A (the D Major chord) in DADGAD tuning:

As you see (or experience if you’re playing your guitar), it can be challenging to play all 3 notes of the D Major chord in DADGAD tuning, depending on where you’re placing your fingers.

If you want to play the open notes of the chord, you can play every string opened except string 3. If you play the A note on string 3/fret 2, you’re still missing F# from the D Major chord. As the screenshot shows, you do have an F# note on string 3 on the 11th fret. This is actually a nice sounding D Major chord.

Another option that I like is playing F# on string 4/fret 4 and the A note on string 3/fret 2. This sounds nice and it’s easy to get my fingers on all the notes.

Here are the locations of the notes G, B, and D (the G Major chord) in DADGAD tuning:

G Major in DADGAD tuning has some interesting options both in sound and finger positions. You can play the open notes D on strings 1, 4 and 6 and G on string 3. The only note missing from the G Major chord is B which is easily played on both strings 2 and 5, on fret 2.

If you bar your index finger across fret 5 and play the D on string 3/fret 7, you’re missing the B note — so that option is not the best if you want to play all the notes in the G Major chord.

Here are the locations of the notes A, C#, and E (the A Major chord) in DADGAD tuning:

I find playing the A Major chord in DADGAD tuning somewhat of a challenge. First, the only open notes are strings 2 and 5, meaning you have to fret 4 strings. What makes this more challenging is that both open notes are the same note (A). To play A Major, we need to add at least one C# and E.

I’ve found two positions that sound good and are relatively easy to play, but require leaving string 6 out:

When I bar my index finger across fret 2, I can easily add C# on string 2.

Another position I like is a little more challenging to play:

This position of A Major in DADGAD tuning is a nice complement to the first because the E and A notes on the 7th frets of strings 1 and 2 are a higher octave and add a nice contrast to the A played on the open string 5.

Here are the locations of the notes E, G, and B (the E Minor chord) in DADGAD tuning:

Check it out – ONE open string to play: G on string 3. If you look at fret 2, we can bar our index finger across the strings and play the G note on string 4/fret 5 with our pinky then play the B note on string 3/fret 4 with our ring finger.

This is a nice, full sounding E minor chord. Any other position I’ve tried sounds empty without the low E sound that I like so much when hearing/playing E m.

Here are the locations of the notes F#, A, and C# (the F# Minor chord) in DADGAD tuning:

As with E m, I like to hear the low note F# on string 6, so my options are limited with other finger positions.

Here are the locations of the notes B, D, and F# (the B Minor chord) in DADGAD tuning:

Another option for B m in DADGAD tuning is:

Be sure to check out our DADGAD chord charts with 167 chords.