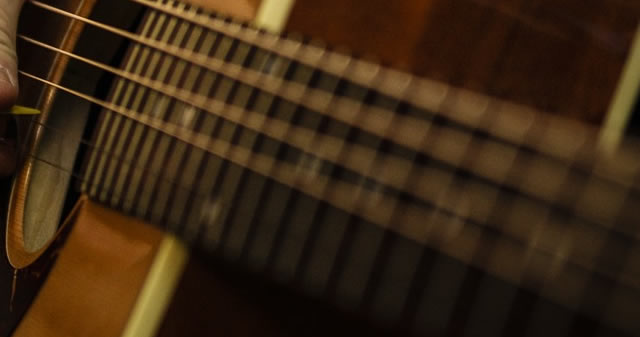 In our first blog post, we looked at DADGAD tuning. In yesterday’s post, we explored DADF#AD (Open D) tuning,  changing the open note G on string 3 in DADGAD tuning and lowering that note a half-step to F#. This change from G to F# changes the open chord from D sus to D Major.

Let’s look at our new tuning: DACFCF in the key of F Major.

In the video below, I’m playing a song called “Breaking Bread” written in this tuning. After the video, I’ll give detailed instructions and screenshots of some of the really nice chords you’ll hear.

One reason I like this tuning so much is that not only are strings 1-5 open, but the notes of F M7 are close together – making it easy to get your fingers on all the chord notes.

My favorite finger position is:

This is a nice, full F M7 with the low F that gives the chord strength but includes the open strings 1 and 2 which give the chord a vibrant, open sound.

When you play F M7 and A# M7 as a progression, you can keep your fingers in the same position as you play one chord and then the next. I like to “slide” into the chords as you saw and heard in the video example at the top of this page.

The next chord in my example progression requires barring your finger across all 6 strings on fret 7 to play the A m7 (Minor 7) chord:

For the last chord of my progression, I keep my finger barred across the fretboard but slide down to fret 5 to play the G m7 chord:

One of the reasons I like this finger position so much is the way I can transition from G m7 back to the first chord in my progression, F M7. It’s easy on the fingers but the chord voicings work really well together.

With this finger position (barring fret 5), you can also play the G notes on string 4/fret 7 and string 2/fret 7 as a variation of the G m7 chord.