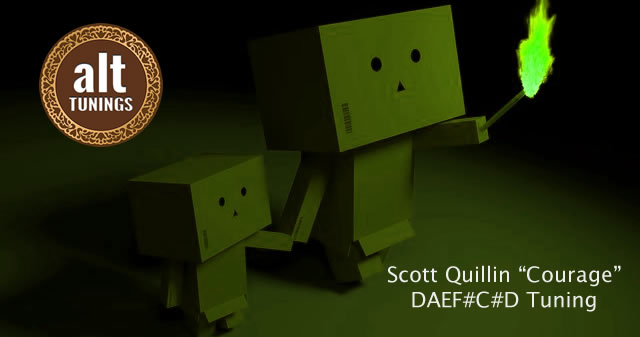 Get your FREE 36-chord Guitar Tunings Chord Charts of open tuning DAEF#C#D (Open D M9) in the Key of D Major below, in 4 different formats!

Tonight’s song is titled “Courage” in the key of D Major.

In the last chord shown in the chord chart (F# Major), not only am I playing outside of the scale (adding the note A# to the scale D Major), I also add the note D to the chord F# Major (string 1 open, which is the note D).

This chord is important to my progression. Can you pick out the “out of key” chord in my song?

Here are the chords I’m playing while using the full version of our chord charts, which illustrate 167 chords in this tuning. (I added the note A# to the D Major scale which allowed me to add the chord F# Major/add D to my chord progression).