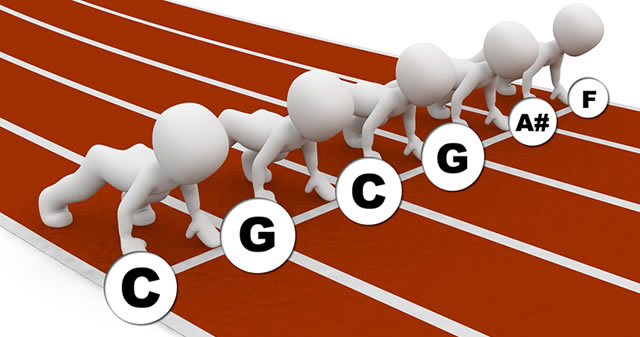 The open notes in CGCGA#F tuning make up the notes in the chord C 7sus so we can call this “Open C 7sus tuning.”

In the video below, I play part of my song, “Valor” which focuses on variations of the C 7sus chord and octave notes of the C Natural Minor scale. Below the video I’ve shared a screenshot displaying most of the notes I’m playing, in scale notes, numbers, scale degrees and intervals.

In the song “Valor,” I start off by playing C 7sus, but because I’m playing the C note on string 2/fret 2, the A# note (string 2 open) is not heard until the third chord of my progression.

In CGCGA#F tuning there are octave C and G notes in the open chord. The second chord in my progression adds octave G# notes on strings 3 and 5. I continue to play octave notes on these strings throughout the song.

As I play octaves up the fretboard on strings 3 and 5, I change the root note from open C (string 6) to G#, G and F to add color and variety to my progression.