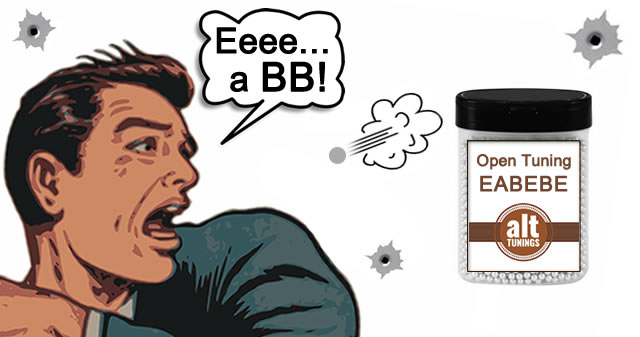 Get your FREE 36-chord Guitar Tunings Chord Charts of open tuning EABEBE (Open Esus) in the Key of A Major below, in 4 different formats!

Today’s song/idea is titled “Eeee…a BB” named after this tuning.

This tuning allows for some great one finger playing. As a matter of fact, the entire intro to the song is played with one finger. Once gain, I’m using my MIDI pickup to trigger a subtle string sound and using my Infinity Looper to record my rhythm ideas so I can play over what I just recorded.

Here are the chords I’m playing using the full version of our Guitar Tunings Chord Charts:

I really enjoy creating my chord charts of my chord progressions and highlighting where I put my fingers. Many of the chords I use in “Eeee…a BB” song/idea are only available in the full version of our Guitar Tunings Chord Charts.

Today’s alternate tuning is Open A M2/add9 with the open string notes: E A C# E…

Today’s alternate tuning is Open A M7 with the open string notes: E A C# G#…